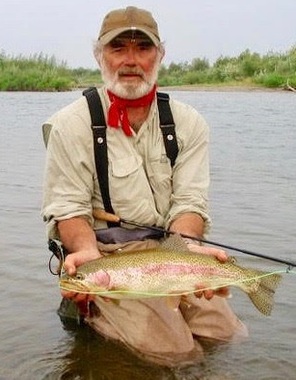 Back to Steve's story

Steve E. Wright IV, 78, of Craftsbury, Vt. died Jan. 16 at home. Wright was born Dec. 12, 1941 in Milledgeville to Stephen Egbert Wright III and Mary Will Johnson Wright.
After his father's death, his mother's marriage to Felix Billue in 1949 introduced Steve to a family tradition of hunting and fishing. These pursuits led to a lifelong love of the outdoors and shaped his career choices.
Family life with two sons, hunting dogs and a tolerant wife was filled with sports, music, square dancing and always hunting, fishing, paddling, roaming the woods and lots of storytelling. Wright could rally a room full of people or hold a dinner party rapt. Storytelling served him well as an educator and advocate, and endeared him to friends, colleagues and students. He loved sports and played baseball, basketball, football and tennis. Later in life he played town league baseball with his sons.
Wright earned a bachelor's degree in biology at Georgia Southern College and a master's degree in aquatic biology and fisheries from University of Georgia. In 1968, Wright and his wife, Susan moved with their newborn son Stephen, to Craftsbury, Vt. First hired as a science teacher at the Sterling School, Steve spent 25 years at what eventually became Sterling College. During that time, he held positions as an outdoor educator, in administration and public relations, and for three years as Sterling's president. Wright inspired students. Long after his Sterling years, former students continued to ask him for career guidance.
Wright took three leaves of absence from Sterling - a 1974 return to Georgia, where he worked as a county extension agent focused on natural resources programming for young people; two years from 1979 to 1980 as a wilderness manager for the United States Forest Service on the Selway-Bitterroot Wilderness in Idaho; and from 1985 to 1988 as commissioner of the Vermont Fish and Wildlife Department.
Deeply committed to habitat conservation, Wright didn't shy away from the challenges in that work. He served seven years on the Vermont State Environmental Board. As a member of the "Rise to the Future" initiative, his leadership helped quadruple the United States Forest Service fisheries budget, increasing angling opportunities in our national forests. He retired in 2009 after eight years as New England Regional Representative for the National Wildlife Federation as a climate change educator.
Barely two years into retirement, Wright became a leading voice opposed to siting 21 turbines along three miles of the Lowell Mountains in Vermont. It was his last role as an educator - to help Vermonters understand that preserving intact upland forest was more valuable climate action than generating electricity. Today, protecting high elevation forest from fragmentation is a cornerstone of Vermont's climate change policy.
Wright continued to hunt, fish and canoe as much as his deteriorating health from Parkinson's disease allowed. He was known locally in Vermont for his photographs, and was a familiar sight along town roads, hovering over his camera waiting for perfect light.
He is survived by his sons, Stephen E. Wright V and Starker Wright; his former wife Susan Wright; granddaughters Cortland Wright and Brooks Wright and their mother, Lynn Wallace; brothers Frank Billue and Philip Wright and his wife Diane; nephew, Wesley Wright; and niece Erin Wright.
Friends and colleagues are invited to a celebration of Wright's life April 11, 1:30 to 4:30 pm at Sterling College in Crafstbury, Vt. Arrangements are in the care of the Cremation Society of Chittenden County. To send online condolences to his family, please visit www.cremationsocietycc.com or send directly to The Steve Wright Family, PO Box 81, Craftsbury Common, Vermont 05827. Donations In memory of Steve Wright can be made to Craftsbury Public Library, PO Box 74, Craftsbury Common, Vermont 05827 or to the Craftsbury Historical Society, PO Box 55 South Craftsbury Road, Craftsbury, Vermont 05826.
Published on January 28, 2020
To plant a tree in memory of Steve E Wright, IV, please visit Tribute Store.

Plant a tree in memory
of Steve

A place to share condolences and memories.
The guestbook expires on April 27, 2020.

Tony Stubbs
my Heart is sad. I spent many day’s hanging out around the the Billue house with younger brother Phillip. Steve always took a little time for us. We were always at Bear Camp lake just figuring stuff out. So sorry for the loss and my sympathy to the entire family. Tony Stubbs Firestone, Colorado.
Wayne Durshimer
I was so glad that I got to see Steve at our class reunion in October last year. This was our first contact since graduation in 1959. Steve and I played football together on the first football team fielded by Wilkinson County and if I am not mistaken he scored the first touchdown in WILCO history. Often I would fly fly fish with Steve at Bear Camp Lake. I am very proud of all his accomplishments. My wife, Betty McAdams, also graduated with Steve. Will miss you Pal.

Wayne & Betty Durshimer
Cuyler Payne
Pat Landers Chapman
It is with great sadness that I read about Steve’s passing. It makes me even more grateful that I attended our 60th High School class reunion in Oct 2019. What fun to be reunited with him after so many years. We remembered summer camps and a scorpion sting. We talked about fishing. I invited him to visit me in Boca Grande and we would fish for tarpon! II makes me sad that will not happen.
I was so impressed reading all his accomplishments. The world has lost a really good man! My love and prayers to his family!
James Eady
Evelyn Taylor Statford
I feel so blessed to have known Steve all through our high school years and to have graduated with him. (Never knew he was so smart)! A very quiet guy! I'm so thankful he was able to come to our 60th High School class reunion this past October! What a wonderful life he lived and so many accomplishments. Who would have guessed this individual came from a small, rural country town in Middle Georgia, Irwinon, GA!! So glad we were friends. RIP sweet Steve!
View all